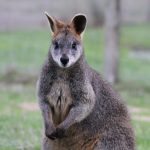 Species: Wallabia bicolor
Common Name: Swamp Wallaby
Natural habitat: East coastal region of Australia, from the northern most tip of Queensland, through New South Wales and Victoria, to the south-eastern borders of South Australia. Its preferred habitat is that of damp, densely vegetated gullies, and swamp areas, hence the name Swamp Wallaby.
Natural foods: leaves from shrubs and vines, young seedling, grasses, ferns, fungi and reeds.
Life expectancy: Approx 15 years.
Other comments: Mating takes place at any time of the year, with no defined season. Females produce a single young, with the birth taking place approximately 7 days after mating. The young embryo (known as a quiescent blastocyst) stays dormant until the pouch is vacated by any other young that the mother may have already. This process is called embryonic diapause. In the case of the Swamp Wallaby, the mating which results in a quiescent blastocyst, takes place up to 8 days before the birth of an established fœtus.. Pregnancy usually lasts between 33 to 38 days, after which the young will firmly attached to one of four teats in the mother’s pouch. Young Swamp Wallabies will remain in the pouch for about 36 weeks, but will continue to suckle until the age of 15 months.