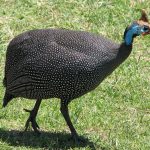 Species: Numididae
Common Name: Guinea Fowl
Natural habitat:  Found in a range of habitats including open grasslands, forests, shrubland and even deserts
Natural foods: Insects, seeds, fruit, worms and other small invertebrates
Life expectancy: 10-15 years
Other comments: Guinea fowl originate from West Africa. They typically live in small groups and make loud ‘clacky’ calls when alarmed. They can breed with other species of fowl such as chickens and peafowl. If a guinea fowl and chicken were to breed, the offspring would be called ‘guin-hen.’