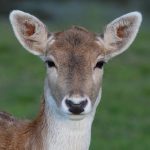 Species: Dama dama
Common Name: Fallow Deer
Natural habitat: Native to the Mediterranean region and Asia Minor
Natural foods: Grazes on grasses and herbaceous plants in summer, and browses on the woody parts of deciduous trees and conifers in winter.
Life expectancy: The fawn runs with the mother at about one month, and is weaned at about four months. Antlers are shed in late winter.
Other comments: The Fallow Deer utters a sound similar to a dog’s bark when it is nervous, such as when a buck engages in battle or a doe has lost a fawn. Other vocalizations include: bleating by a pregnant female or a female with fawns; mewing, a submissive call; the peeping of a fawn to contact or alert its mother; wailing by a fawn in intense distress; and groaning, a belch-like sound that lasts about one second but that may occur in a series, with four to five seconds between groans.