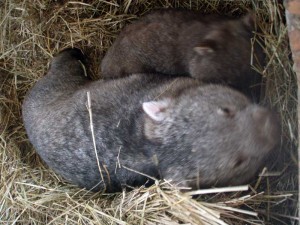 Species: Vombatus Ursinus
Common Name: Common Wombat
Natural habitat: Coastal regions of south east Australia and in Tasmania. Prefer wetter, rocker, and cooler regions; with area appropriate for burrow making and burrow drainage.
Natural foods: Grasses, herbs, roots, bushes, trees, fungi, mosses and leaves.
Life expectancy: approximately 5 years.
Other comments: In the past were found throughout south east Australia, but now found only in the coastal regions of Australia. They are native only to Australia and have been commonly mistaken for a bear. They dig large burrows up to thirty meters long and live generally alone growing to an average size of 1 meter long and a weight of about 25kg. Most Australians have not seen a wild wombat. It has been reported that the marsupial can out-dig a man with a shovel as they can dig in the hardest of soil and only come to a halt when approaching solid rock and loose sand. They are very good swimmers and runners.