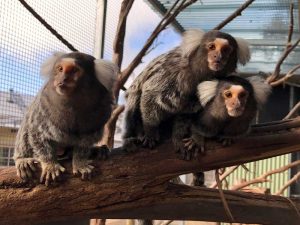 Species: Callithrix jacchus
Common Name: Common Marmoset
Natural habitat: Common marmosets are a New World monkey found through the scrub forests and humid Atlantic forests of North Eastern Brazil. It is one of the smallest species of monkey and gained its name from the French word, marmouset, which means dwarf, or little.
Natural foods: They eat a range of fruits and insects. Their favourite food is the sap of the acacia tree.
Life expectancy: In the wild they live for 12 years and in captivity up to 16 years.
Other comments: Unlike most monkeys, they have modified claws rather than nails and females typically give birth to twins.