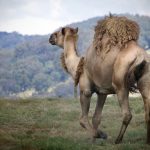 Species: Camelus dromedarius
Common Name: Camel (also known as Dromedary, Arabian and one-humped camel)
Natural habitat: They inhabit South West Asia and North Africa. They are also feral in Australia after being introduced in the mid-19th century, principally as draft animals – about 500,000 survive wild in the outback.
Natural foods: Camels eat a variety of wild plants that many other animals avoid, such as dry vegetation, thorns and salty plants. They also sometimes scavenge on bones and dried-out carcasses
Life expectancy: They live for 40-50 years
Other comments: They are desert animals and have have numerous adaptations for life in an arid habitat. They have webbed feet (to prevent sinking in the sand); they can close their nostrils and they have a double row of eyelashes to keep out the sand. They can endure long periods without drinking – up to 17 days. When they do drink, they can take up to 136 litres (30 gallons) at a time. By producing dry faeces and little urine, they can conserve water. Their body temperature can rise 6-8 degree Celsius before sweating.