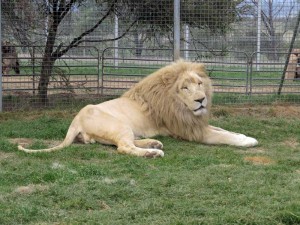 Species: Panthera Leo
Common Name: African White Lion
Natural habitat: African savannah grassland
Natural foods: Medium to large sized mammals such as antelope, buffalo, zebras
Life expectancy: 15 to 18 years
Other comments: Top speed of the lion is 81 km/hour at short distances. Both males and females loins roar and it can be heard more than approximately 8 kilometres away. The lion population in Africa has been halved since the early 1950s, today fewer than 21000 remain. Poaching in African national parks still occurs to this day. Historically, lions have been found from Greece to the middle east. The lions are the only social member of the cat family as they live in prides with females making up the majority of the pride. Females do most of the hunting and work in teams to hunt down prey. Males will roar and use sent marking to establish their territory. Lions are the second largest member of the feline species, second only to the tiger.